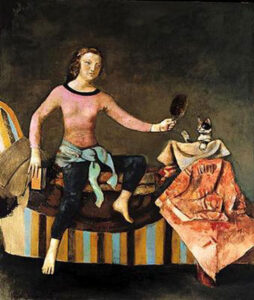 Author of the painting in this scene is Balthus, he was an esteemed but controversial Polish-French modern artist. A common theme of his works are cats and young girls. In addition to images Balthus also created book illustrations and theatrical set designs.
In 1921 Mitsou, a book which included forty drawings by Balthus, was published. It depicted the story of a young boy and his cat, with a preface by Balthus’s mentor, the Bohemian-Austrian poet Rainer Maria Rilke (1875-1926) who at the time was his mother’s lover. The theme of the story foreshadowed his lifelong fascination with cats, which resurfaced with his self-portrait as The King of Cats (1935).