The Garden of Earthly Delights 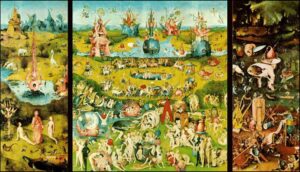 By far the best known and most ambitious work, The Garden of Earthly Delights illustrates Bosch’s individual artistic style, containing the most vivid imagery and complexity of symbolic meaning. The triptych is generally thought to be a warning of the dangers of giving in to temptation.
The three scenes of the inner triptych are probably (but not necessarily) intended to be read chronologically from left to right. The left panel depicts God presenting Eve to Adam, the central panel is a broad panorama of socially engaged nude figures, fantastical animals, oversized fruit and hybrid stone formations. The right panel is a hellscape and portrays the torments of damnation.
In this scene, Annie (Annabella Sciorra) writes in her diary that will commit suicide.