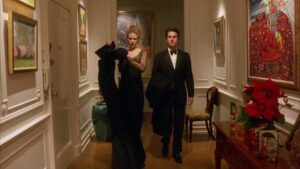 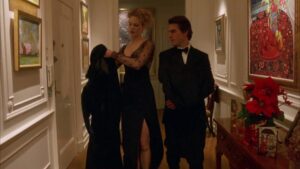 Painting appears at the beginning of the film, when young couple is going to the ceremonial reception. It hangs on the corridor between other paintings.

Whole movie “Eyes wide shut” is full of paintings made by Stanley Kubrick’s wife – Christiane. She was born in Germany but her painter career started in California and New York during art studies. International success followed with exhibitions in New York, Rome and London and later in her career, when Christiane and her family finally settled in Hertfordshire, the joy of bringing art to people was opened up to her when she exhibited at “Art in Action” at Waterperry, Oxfordshire. Read more: on christianekubrick web .