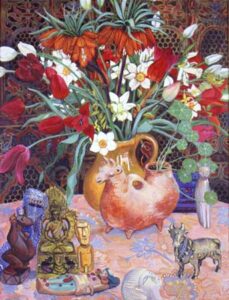 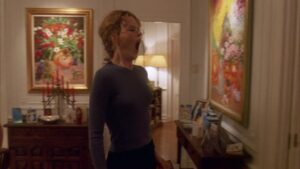 Christiane Kubrick is a German actress, dancer, painter, and singer. She was born in Braunschweig, Lower Saxony in 1932, the daughter of two opera singers Fritz Moritz Harlan and his wife Ingeborg (née de Freitas). She was trained as an actress but became better known as an artist. Success in her earlier career as an actress led to her being cast in the film Paths of Glory by Stanley Kubrick, credited as Susanne Christian. Read more: wikipedia .

This painting appears many times during whole movie, hang’s in Harford’s house in dining room.