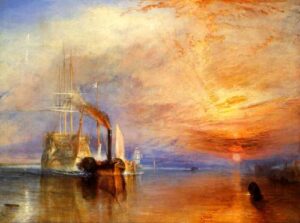 Bond meets up with his new quartermaster Q in the museum.
The painting depicts one of the last second-rate ships of the line which played a distinguished role in the Battle of Trafalgar in 1805, the 98-gun ship HMS Temeraire, being towed by a paddle-wheel steam tugboat towards its final berth in Rotherhithe south east London in 1838 to be broken up for scrap.
The painting hangs in the National Gallery, London.
Symbolism: Bond is like a ship HMS Temeraire and Q as a steam tugboat.