Untitled (Men in the Cities) 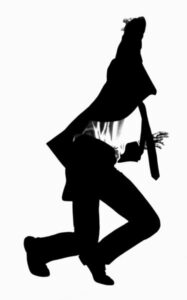 An American painter and sculptor, Robert Longo, became a rising star in the 1980s for his “Men in the Cities” series, which depicted sharply dressed men and women writhing in contorted emotion. Longo’s “Men in the Cities” continues to be an iconic touchstone, showing up in Patrick Bateman’s apartment in Mary Harron’s film adaptation of Bret Easton Ellis’ novel American Psycho. This painting you can also see in the later scene (00:40:18, 00:57:14).